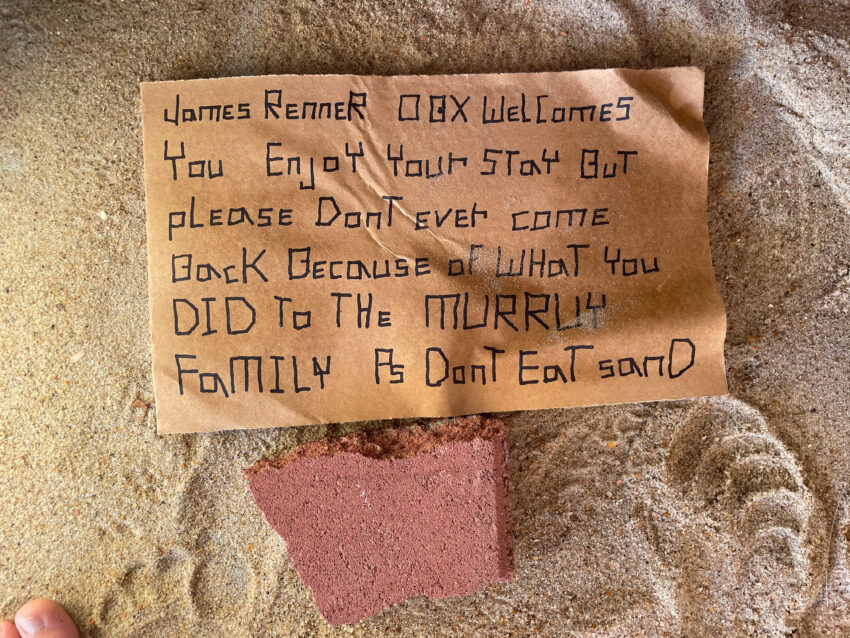 This past weekend I attended a true crime convention in Vegas. This is something I’d been looking forward to for a long time. It’s a great way to meet fans and other podcasters. About a week prior to the event, Sarah Turney announced that Julie Murray would participate in a panel discussion arranged for the beginning of the convention. I was disappointed to hear this, because the last time Julie attended a crime convention, she brought with her Erinn Larkin and Scott Wahl.

I have been the direct victim of both Larkin and Wahl, this last year. Larkin created a fake tip in Maura Murray’s case in a weird scheme to discredit my reporting. And Wahl… I mean, check it out. I spent the weekend looking over my shoulder.

On Saturday, Julie Murray approached a friend and author at her booth. This woman, who asked that her name not be used for now, was also involved in the nonprofit organization Let’s Bring Them Home, which offers reward money for cold cases. In fact, they had offered $75,000 for information in Maura Murray’s case, but in a very rare move, they rescinded the offer due to the Murray family’s odd behavior. Fred wanted the tips before the police and someone using Julie’s phone number was calling the hotline and hanging up. At the convention, Julie alleged to this author that I had either manufactured the email from Fred that was sent to the nonprofit or I had published a fake document. This woman felt that Julie was trying to get her to change her story. But she assured Julie that everything reported was accurate. Julie said something to the effect of, I hope Renner doesn’t ruin your life and then stormed away.

On Sunday, around 10:30 I began to pack up my booth to leave before checkout at 11 a.m. I had plans with friends to see an exhibit. It was then I got a call from the author who told me about the previous day’s conversation. Julie was right around the corner, and it was a public venue, so I went to speak to her.

I asked Julie a few questions: Why was she claiming the email was doctored? Why has she never asked her followers to leave my family alone after one of her advocates stalked us on vacation.

It was a calm conversation. I wasn’t angry. But I was very hurt and I’m sure that came out. Julie was calm. After we spoke, I left and went back to my table to finish packing. As I was about to leave, security came over. They told me Julie was upset. I told them I was packed and on my way out. Nobody asked me to leave.

I had hoped to maintain a peace at the convention. I was shocked when Julie broke that agreement by publicly accusing me of some weird plot to get a reward I never knew about rescinded.

One more note. I have tried since last July, when one of their people stalked my family on vacation, to come to an understanding with the Murray family. I offered them this website. I offered them a portion of money from booksales to go to a nonprofit of their choice. All I asked for was them to tell their followers to leave my family alone. They will not respond.

In the meantime, many other people have been victimized by their followers. Here’s some further links:

They target innocent people from UMass, going so far as to trick admissions into giving them information.

A woman from Ohio had to file a police report because of their harassment.

The residents of Haverhill had to band together and plead with the family to leave them alone. The family still intends to search this week.

Julie operates as the spokesperson for the family. She has not once condemned this behavior directly and it continues because her supporters see this silence as tacit permission to continue. They are hurting people. They are directly targeting me simply because I have reported on the case. And I am fearful of their actions.

I am aware and have sympathy, in that this is a missing persons case. I think it should be noted that there is no evidence of a crime in this case. All we know is that a grown woman left on a trip and chose not to tell her family where she was going. And as much as I sympathize, this does not give the family the right to create more victims.

I am not the only journalist who is being targeted. Maggie Freleng, who covered the case for Oxygen, has received multiple death threats. Additionally, Marshal Art Roderick has been the target of their groupies. Prosecutor Jeffrey Strelzin was threatened w decapitation. Even after all this, the family has never once told their followers directly to stop and the perpetrators of some of these threats are still members in good standing on their social platforms.

14 thoughts on “What Happened in Vegas (apparently doesn’t stay in Vegas).”