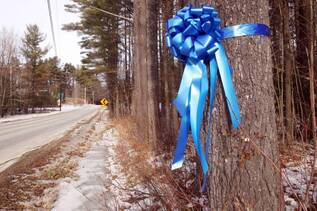 Following years of harassment by the family of Maura Murray and their legion of armchair “detectives,” residents of Haverhill near the scene of Maura’s accident have finally had enough. Last week, they sent letters to the Chief of Police and Town Manager, as well as Murray family spokesperson Julie Murray, warning them they will no longer cooperate with people trespassing on their property.

For years, Fred Murray has alleged a “local dirtbag” kidnapped his daughter, though no evidence of a crime was ever discovered. Additionally, Maura was an adult woman who was in the midst of a trip (whether short term or forever) in which she chose not to inform her family of her whereabouts. A couple years ago, after Fred and family alleged that Maura was buried under concrete in a basement, authorities dug up the cement and found nothing. Even after the state police proved no body was buried there, Fred and others continued to come onto the property without permission. The new homeowner, hoping to find an amicable solution, sent a legal contract to the Murray family, giving conditions for further searching, but the family never responded.

An online cult devoted to the case has grown on Facebook groups – and are currently planning further unofficial searches this year.

The letter goes on to say:

In regard to our property access denials, we, the under-listed, should not be contacted by any Murray associates or supporters, whether by name or anonymously. The Murray’s should inform their “community” that if anyone wishes to discuss anything with any of us, they should refer such interest to the Haverhill Police Department.

Julie Murray has yet to post their request online.

They have good reason to be fearful of the advocates who work closely with the family. Last year, Erinn Larkin and Scott Wahl, were caught stalking the online profiles of residents involved in getting rid of a tree at the site of the accident. After this was revealed, the Murray family chose to continue working with them. When actions like that are not addressed directly, and quickly, it’s easy to see how supporters of the Murray’s efforts would think such behavior is welcomed.

Home owners are prepared to press charges against trespassers.